One of the biggest keys to soundproofing walls is the decoupling of a structure.  In this blog post we will be discussing what acoustic decoupling is, how to achieve it in a wall structure, and some of the downfalls of wall decoupling that can be solved with Green Glue Noiseproofing Compound.

Acoustic Acoustic wall decoupling is the means of mechanically separating the two sides of a structure so they vibrate independently from each other. Decoupling is one of the most effective ways of isolating sound on one side of a wall and preventing the sound from passing through to the other side.  Most standard walls are single stud construction which means that both sides of the wall are connected to the same stud.  When sound waves hit one side of drywall the vibrations channel through the stud and vibrate the other side's drywall.  See the images below showing the passing of sound through the studs:

In the images below you will see a staggered stud wall which limits each stud to touching only one side of drywall.  As you can see the vibrations cannot transit through the stud to the other side of the wall anymore.

WAYS TO DECOUPLE A WALL

There are three ways to decouple a wall, the most effective way is the double stud wall.  This method is achieved through building two separate stud walls with a small space between the two sides.  This is also one of the ways to build what is referred to as a "room inside a room".  All of the interior structures of the inside room (walls, floor, and ceiling) are isolated from the existing room so the entire room is decoupled.  Although highly effective, a double studded wall has one very large downside: a loss of a lot of space. 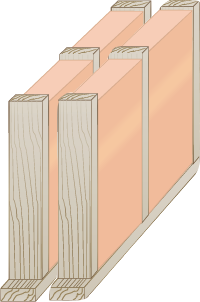 The staggered stud wall is similar to the double stud wall although it uses less space but is slightly less effective in decoupling.  A staggered stud wall can be constructed by using a wider sill plate and installing the studs in a staggered alignment.  The studs are rotated from one side of the wall to the other, so no one stud touches both sides. 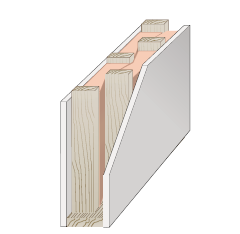 In many cases, the first two methods either take up too much valuable space or are too complex to construct.  Luckily there is a third method which will successfully decouple a wall.  The use of resilient clips and hat channel can be added to one side of the wall.  Although both sides of the wall will share the same studs, the channel and clips are designed to flex and absorb most of the vibrations hitting the drywall. 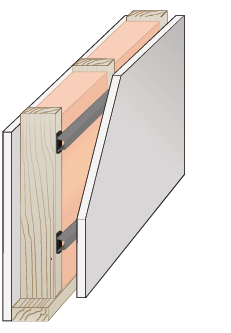 While decoupling a wall structure is a key step in sound isolation, it also has a drawback: Resonance.  A decoupled wall will perform exceptionally well at isolating higher frequencies but it can actually perform worse with low frequencies. The air inside the cavity will actually act like a spring and transmit the lower frequencies through to the other side. All hope is not lost though, this resonance can be lowered  by two other soundproofing principles: Adding Mass and Dampening.

This is as simple as it sounds, adding mass to the wall prevents the sound vibrations from "pushing the wall around".  The heavier the wall structure the harder the wall is to vibrate, its as simple as that.  You can add mass to a wall by adding layers of drywall or a layer of mass loaded vinyl which takes up less space (1/8").

Dampening can be accomplished by the addition of Green Glue Noiseproofing Compound between two layers of drywall.  The Green Glue is a visco-elastic compound that converts the sound energy into heat, greatly reducing the amount of sound introduced to the interior structure.  Green Glue is also highly effective with lower frequencies, so adding this material to a decoupled wall go hand and hand. 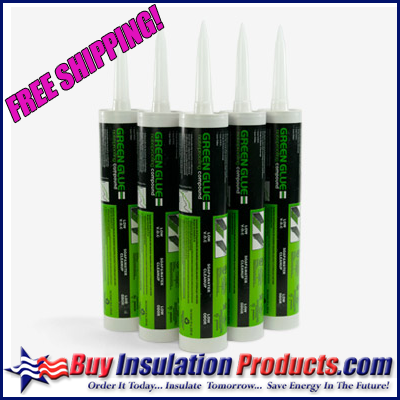 ADDITIONAL BLOG POSTS RELATED TO THIS ONE:

Green Glue Can Help You Easily Noiseproof Your Apartment Walls

Should I Use Green Glue Tubes or Pails?

What is Green Glue Noiseproofing Compound and How Does It Work?